We have a team of experienced dog trainers providing local dog training and dog sports activities such as agility and scent work. 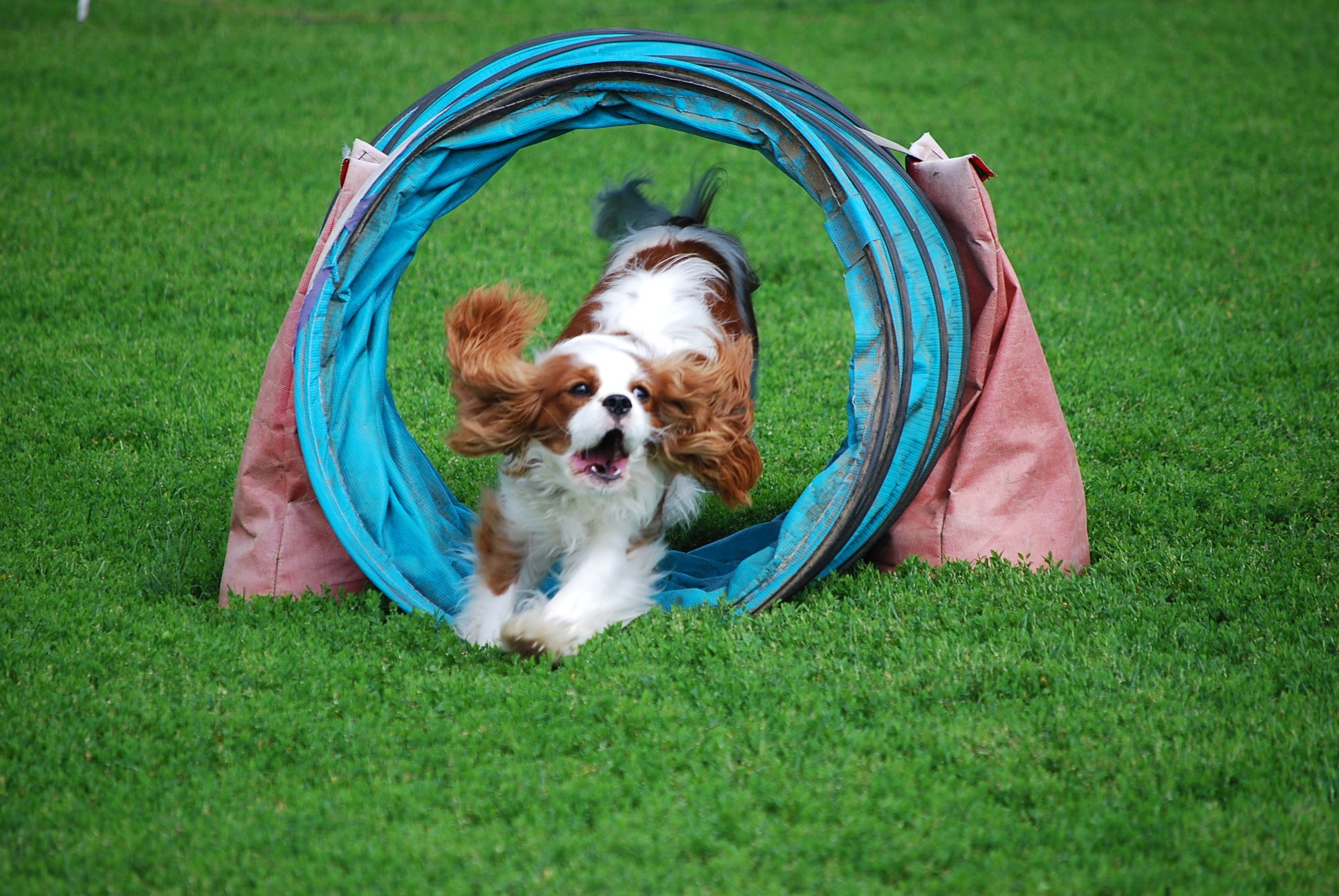 Shake-a-Paw opened its doors in 1998 and has over the years developed into a school where you can start your puppy off on the right paw, create a wonderful canine companion, or work towards competing in dog sports including agility and scent work.

Local dog training in the Kemptville / Winchester area. We also provide dog sports training in scent work and agility at our facilities year round.

Meet Our Experienced Trainers at Shake-a-Paw 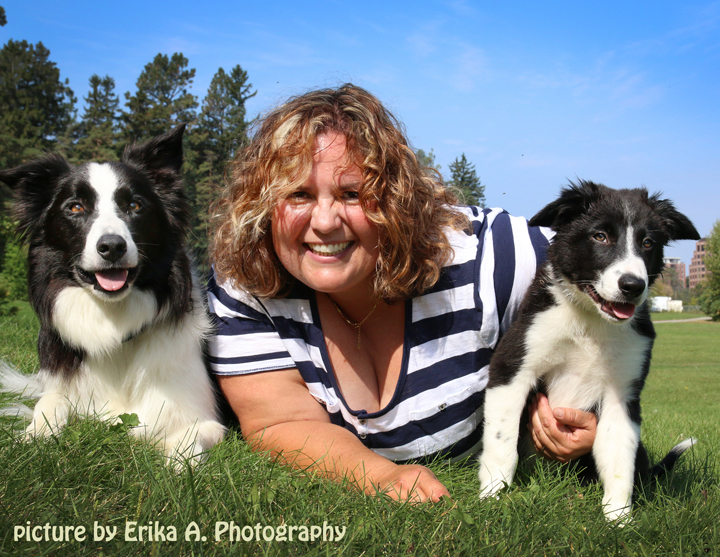 With 20+ years of dog training experience, and 10+ years competing with several of her own dogs in agility, scent work and obedience, Paola provides private training packages for puppies, reactive dogs, and dog sports (all levels). Read more about Paola here.

Paola has obtained various obedience and agility titles over the years with her Akita – Yukon, her Siberian Husky – Max and her Border Collie – Iggy.

Most recently she and Iggy won the Eastern Ontario Regionals in the 26” division – a huge and wonderful accomplishment!

Paola believes deeply that one of the most important qualities in any canine companion is that they are well mannered and well-tempered. This has led her to become a certified Temperament Test (TT) and Canine Good Neighbour (CGN) tester. 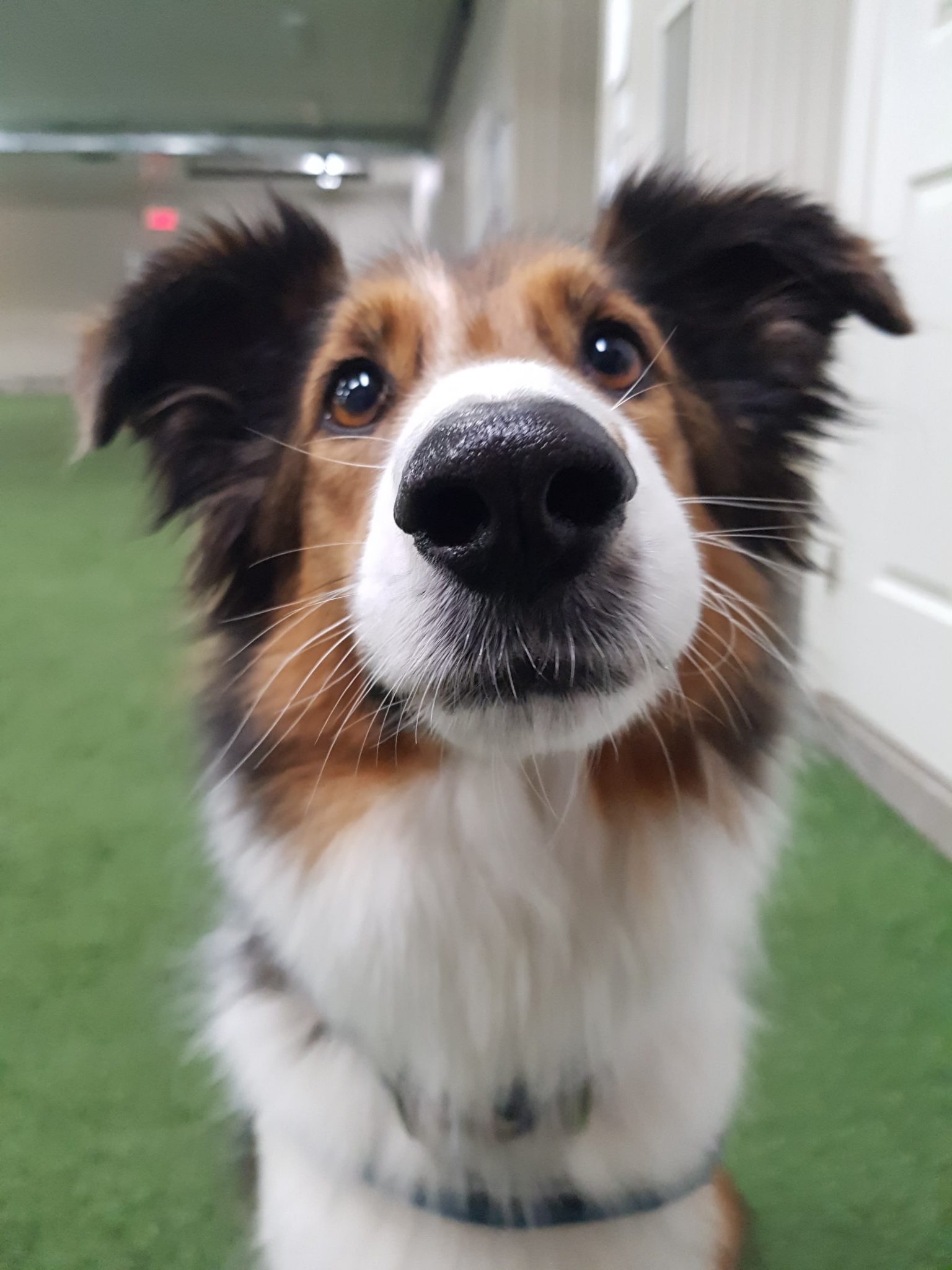 This is Crys’s alter ego, D’art.

Crys has been in the dog world for many years working as a vet tech.  Four years ago searching for something to do with her blind Pug/Boston mix she was introduced to scent work and the rest is history.  Since then Crys has spent many hours learning all there is to know about how dogs use their noses. 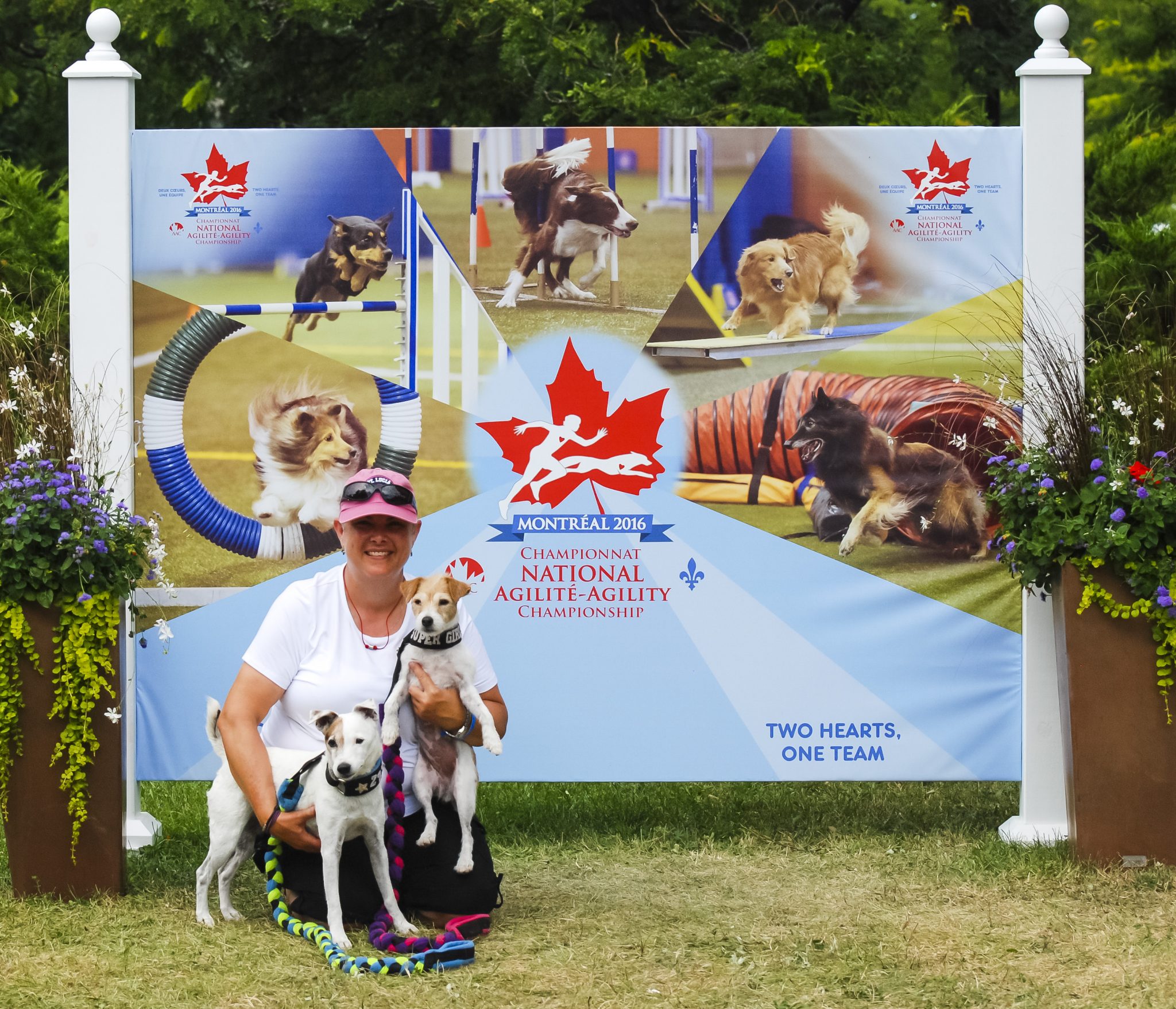 Paula got her first dog, a poodle named Susie, when she was 2 years old (Paula, not the dog).  It took a few more years before she got involved in dog sport, but a Doberman named Willi took her into obedience at the tender age of 13 (again Paula, not the dog).  It wasn’t long before Paula was asked to assist a local obedience instructor in her classes, & things really took off for her.  She started running her own classes at home, teaching for a local obedience school, & trialing, all before she was old enough to drive.

When Paula moved back to the country & out of an apartment building after going away to school, one of the first things she did was get a puppy. This even though she & her husband (the incredibly tolerant Dave) were living in a 14’ trailer while their house was being built.  That puppy was a lovely Dobe girl named Abra.  Abra was as sweet as sweet could be but had way more energy than anything either Paula or Dave was used to.  Paula took her off to obedience classes but got bit by the agility bug just as the sport was being introduced in Canada.  Abra excelled, despite Paula’s lack of experience in that type of training & despite the use of old-school obedience techniques in a sport that really didn’t seem to call for correction training.

But because the overwhelming lack of agility instructors, Paula stepped up to help teach in Canada’s founding agility club.  She ended up as one of the early A.A.C. agility trial judges & even did a term as President of the A.A.C.

Paula brought 2 more Dobes into her family before a clinic with Patty Ruzzo opened her eyes to the benefits & joys of reinforcement training. Her whole dog world changed in the course of one Saturday.  She figured that if Patty could put H.I.T.s on sight hounds using squeezey cheese, should could certainly do the same with a Doberman Pinscher.

As Paula became more obsessed with the sport of agility, she became more involved in teaching, taking clinics, & trialing.  In 2004, she got her first Jack Russell, Jazz.    Unfortunately for the Doberman Pinscher world, that meant the end of Dobes in her home.  She was smitten with the happy-go-lucky attitude & work ethic of her little white whirl-wind.  Jazz retired from the sport 4 years ago – Paula’s goal was for Jazz to run his last agility with joy & dignity – healthy & happy, but ready to relax at nearly 12 years of age.  But Jazz was the start of a love of the breed.  Paula & Dave now share their home (& bed) with not only Jazz & B.B. (11)

Paula has trained with Julie Daniels, Terry Simons, Janet Lundy, Tiffany Salmon, Jessica Martin, & Daisy Peel.  She is a firm believer that we can learn something from everybody out there & loves learning new techniques & skills. She has had her struggles with some of her dogs, but a stubborn streak & some good advice helped her overcome those problems.  She also believes that not every method will work with each dog & more than willing to try different methods to find one that suits 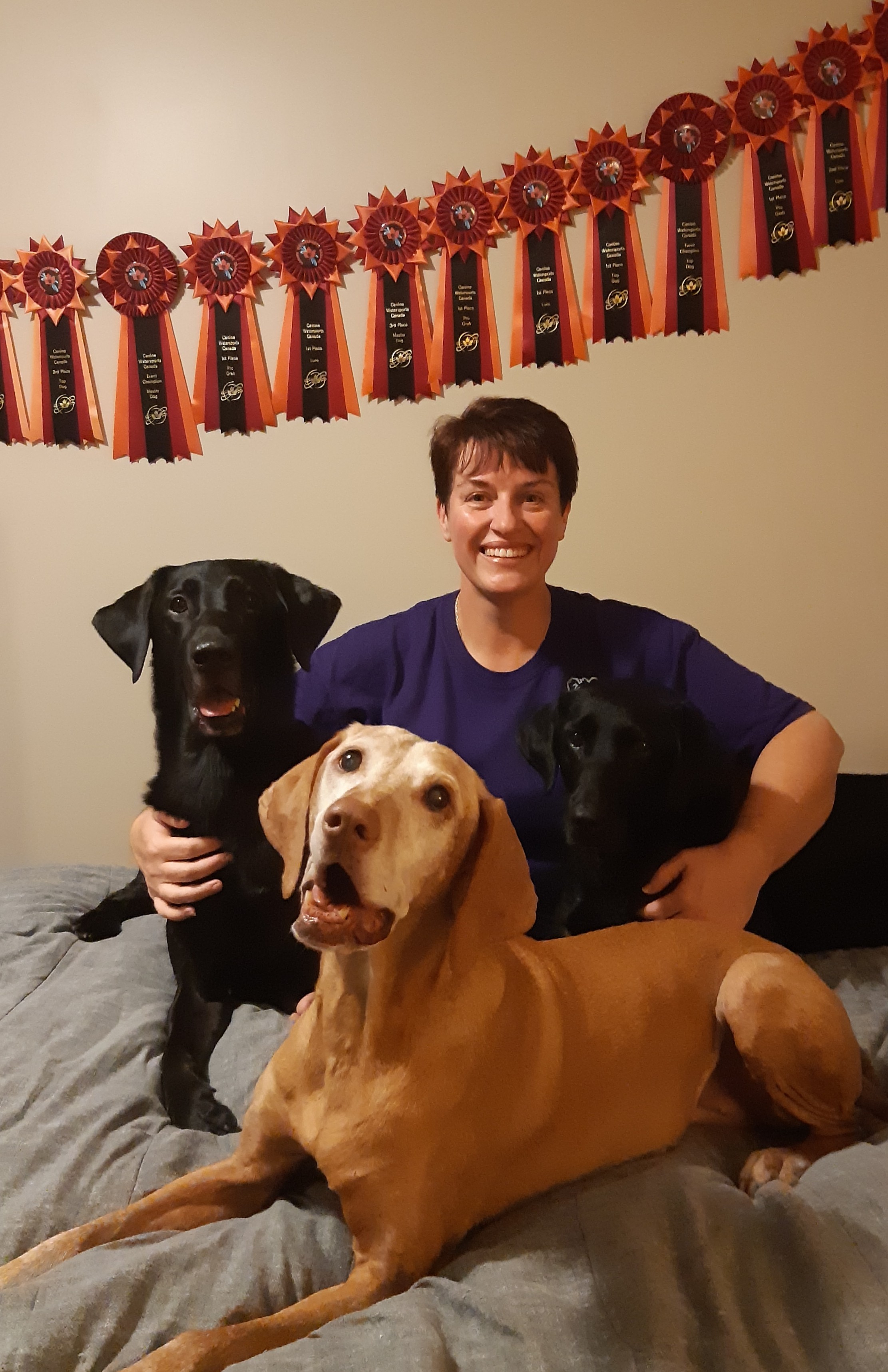 Alison has been involved in dog sports for over 20 years.  She has taught obedience and agility but more recently has been actively competing in dock diving, agility, nosework and is giving flyball a go.  Alison believes that being involved in dog sports whether competitively or just getting out once a week for a class, opens up your world to a wonderful relationship with your dogs and the chance to meet new people, see new places and have so many enriching experiences!

Alison is currently loved by two black labradors, a viszla and a siamese cat. 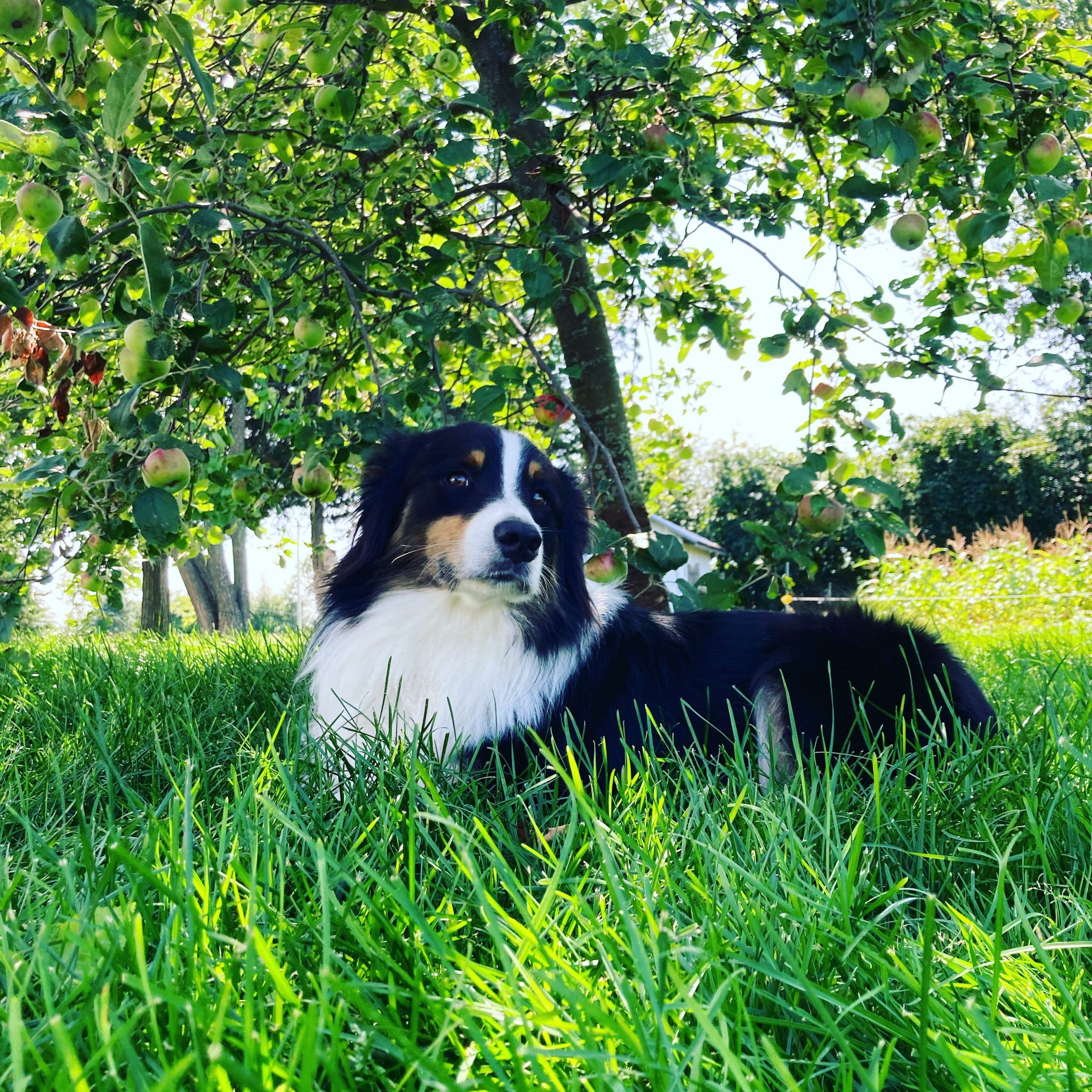 Chantal has been involved in dog sports for the last several years, where she began her journey with her Border Collie Shelby. Along the way, she has met many amazing, like-minded individuals (and their dogs)!

She has actively competed in nosework (her passion) and has most recently been working Tucker (pictured above) in agility. Chantal has found that the dog sport community has provided an outlet for her during particularly challenging times, and has given her so many new friends. She’s looking forward to seeing what the years will continue to bring.

Chantal currently has a Border Collie, and two Australian Shepherds, as well as an assortment of other animals on her hobby farm.

tell me about you

Click the GET STARTED button and fill in the enquiry form so we can learn a little about you and your dog.

Book a date in the online scheduling calendar for us to meet in person or via video call.

We’ll discuss your current relationship with your dog, what your vision of a dream dog looks like, and plan a course of action to guide you and your canine companion to success.

“Thank you for giving me the opportunity to tell everyone about my precious special skye terrier, Skye. We bought Skye from what we later found out was a puppy mill out of Quebec. She came to us very sick, in fact almost dying in the first week. She was so sick, and I loved her so much I carried her around her first 48 hours not knowing if she was going to make it or not. Well, she did, but we soon found that she was a damaged dog due to abuse and I was the only person she truly trusted. How I loved that little girl! She was so afraid, and bit, hating anyone coming near me. Eventually she let in my husband, and my sister but that was it.

We wanted Skye to be all she could be so we enrolled her in your obedience class when she was 6 months old. What a wonderful time we had and you helped Skye so very much! She did socialize with other dogs as long as I was by her side. What you taught us to help Skye was nothing short of a miracle. She became a different dog, still damaged, but not as worrisome. Without your training classes Skye would not have made it the 4 years we had her.

Thank you for what you did for this dear little dog. You are nothing short of a miracle worker!

Skye had 4 good years of love from me, and if not for you, it would have been much less. Thank you for having such fun interesting classes, they made the difference Skye needed.

Ready to get started?

Fill in the short online form telling us about you and your dog, and schedule your personal consultation so we can help you achieve the dog of your dreams! 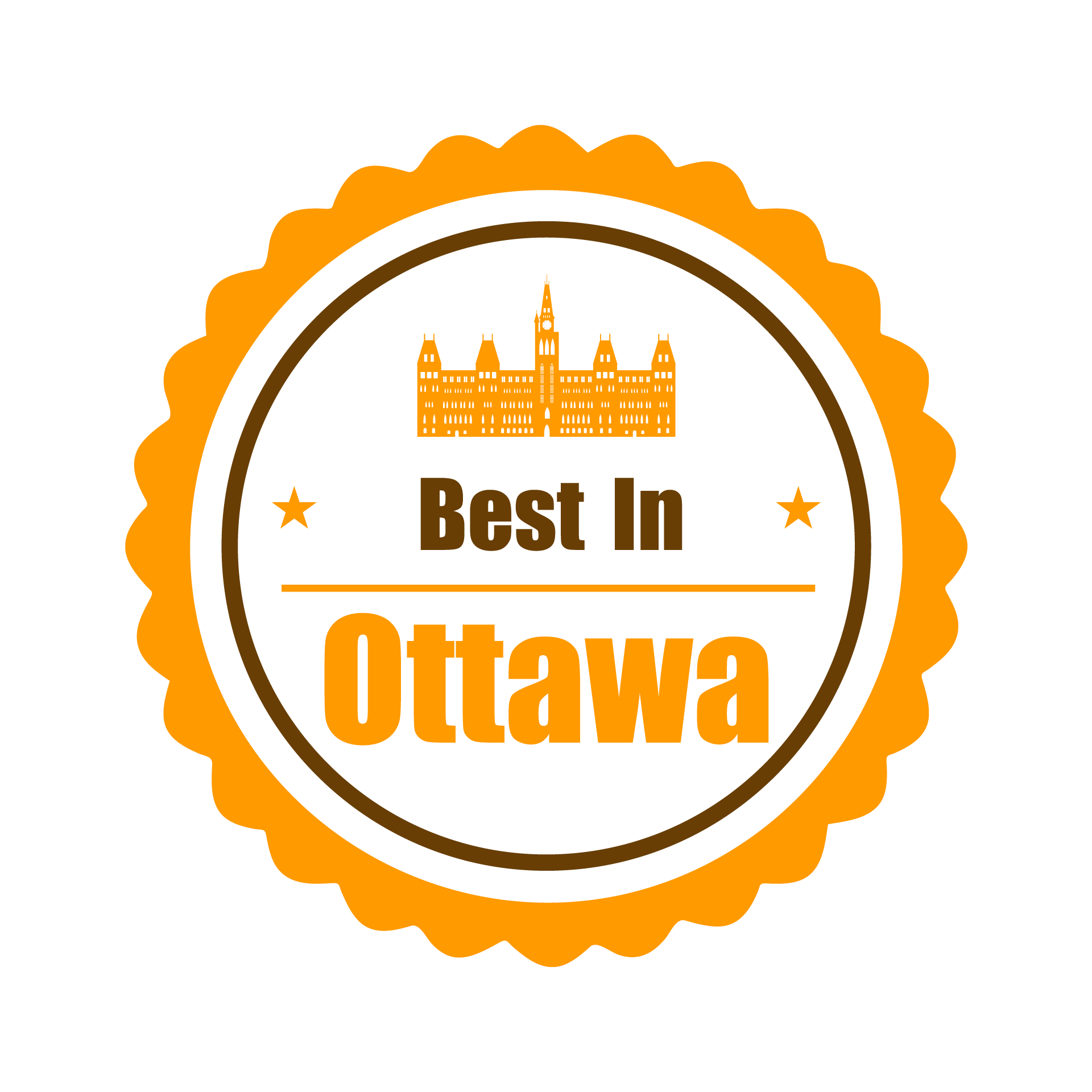